Get fresh music recommendations delivered to your inbox every Friday.
We've updated our Terms of Use. You can review the changes here.

by Charity and the JAMband 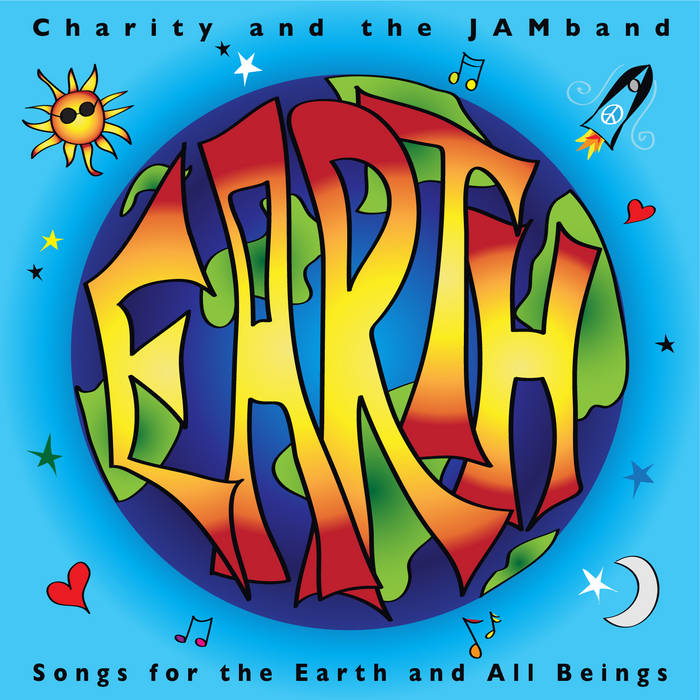 This music is dedicated to our beautiful, precious Earth and all her beings and ecosystems, the air and light and water and soil that nourish us, and our deepest, most tender hearts, which know wisdom and compassion, and will find a way to wake up and transform human society into one guided by healing, peace and love. Deepest gratitude to my family and community near and far, my many teachers, and all the shining folks that sing, dance and breathe along. May all beings be free from suffering.

For lyrics, chords and activities, visit jamjamjam.com/earth.html
For more music like this, visit us at jamjamjam.com. See you at the show!

Fermenting fun amidst the organic and inspirational environment of San Francisco, Charity and the JAMband have spent the past decade-and-a-half serving up delightfully groovy tunes for young ones and their big people. This spring, Charity Kahn and her merry band release their most deeply felt and resonant album yet, EARTH. Aptly named, this celebratory collection of 10 original new songs arrives on Earth Day, April 22 (available from CDBaby, iTunes, Spotify, Amazon and more).

As Mindy Thomas, host of SiriusXM’s Kids Place Live show has noted, Charity and the JAMband make "barefoot, sun-on-your-shoulders, hula-hooping music for funky families.” With their seventh album Charity the JAMband (Joy and Music band) celebrate not only the fresh beauty of our planet, but also the sense of unity and hopefulness inspired by experiences in nature.

A strong spiritual thread, pointing to the power of love and intentional living, runs through EARTH. The album, produced in San Francisco by bandmate Daryn Roven at The Raindrop and Studio Trilogy, begins with the acoustic and ethereal “Keep a Green Tree in Your Heart.” Each song inspires listeners toward mindfulness, especially with “Pebble Meditation Song,” which is drawn from the work of spiritual leader and peace activist Thich Nhat Hanh. The song “Earth Day” asserts, “Every single day should be Earth Day,” reminding us that we are all caretakers of this fragile planet. EARTH ends with a lullaby called “Little One” – a prayer from parent to child, with all of the tender hopes, fears and dreams inherent in that foundational relationship. But this is not just a contemplative album; songs like “Share Your Love,” “Sing a Summer Song,” and “We Love Everyone” present Charity and the JAMband’s trademark rootsy-jammy rockers. JAMband’s many fans have dubbed their their musical style as “mindful rock’n’roll,” “conscious music for families,” the kind that happens when “’Free to Be You and Me’ grows up and rocks out.”

“This is a celebration, like all of our albums,” notes Charity Kahn. “Whenever we record a song, there’s a metaphorical looseness, an organic earthiness that we embody. We hope to convey the feeling of openness, of aliveness...the sense that anything can happen.”

Kahn emphasizes that Charity and the JAMband concerts are “rocking celebrations of coming together as one big family, united by song, dance and love.” The band (which includes Roven, Paul Lamb, Laurie Pomeranz and David Rokeach) celebrates the release of EARTH with a free, all-ages concert at 5 pm on April 22 at The Park Chalet in San Francisco (the kick-off show for the 13th annual JAMband Family Festival Concert Series created and produced by Kahn), and more concerts at Rainbow Fest (April 24) and Sweetwater Music Hall in Mill Valley (May 1). On Saturday May 14th, Kahn and noted storyteller Olivia Hackett-Shaughnessy will present an event for adults in San Francisco: “The Motherlode: Songs and Stories from the Vein – A Concert for the Mother.”

Charity Kahn has a degree in math from Stanford, has co-authored a book on math and music, and has worked as a software engineer in the technology industry. Motherhood opened the door to a new life of musical devotion and creation and allowed Kahn to live her real passion. Since 2002, Charity and the JAMband have been bringing the rock ‘n’ roll experience to families, touching the hearts and inspiring the dancing feet of this generation’s breed of family music lovers. Charity and the JAMband recordings include Family Values (2012), Party Like a Twinkle Star (2010, NAPPA Gold Award, Parents’ Choice® Silver Honor Award), Rock Your Socks Off (2006, Parents’ Choice® Gold Award, Children’s Music Web Gold Award, Fids & Kamily Award), and Peanut Butter and JAM (2004, Parents’ Choice® Approved Award). Charity Kahn previously released two solo albums: JAM: Music for Movement with Children (2002) and firstborn (1999). In addition to singing and recording original songs, Kahn leads popular weekly JAMboodas music and movement classes for young children, and she runs sold-out spring and summer JAMcamps for school-aged kids in San Francisco. Visit www.jamjamjam.com for the latest updates.

Charity and the JAMband San Francisco

Fermenting fun amidst the organic and inspirational environment of San Francisco, Charity and the JAMband have spent the past decade-and-a-half serving up delightfully groovy tunes for young ones and their big people. Come join the JAM! www.jamjamjam.com ... more

Bandcamp Daily  your guide to the world of Bandcamp